Many houses and commercial buildings in New Jersey are outfitted with copper or cast iron pipes, especially in somewhat older homes built during the 1970s and earlier.

Copper has a long history of use for plumbing pipes, as it’s durable, nontoxic, and easy for plumbers to work with. It’s also more corrosion- 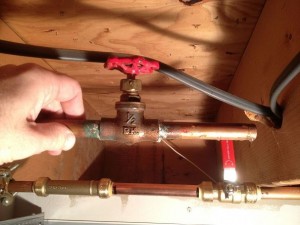 resistant than iron, which is highly prone to rust.

However, as copper and cast iron sewer plumbing pipes tend to be decades old, the pipes in many homes are actually due for replacement.

At Degrace Plumbing, our contractors can install water pipe replacements for copper, whether you prefer to replace the existing copper pipes with new copper pipes, or to install a different material like PEX piping instead.

If you have aging pipes in your home, water pipe replacements are a worthwhile investment to prevent your home from water leaks and water damage.

When Do I Need To Replace My Pipes?

Plumbing pipes made from copper are built to last for decades. In fact, cast iron and copper pipes can last up to seventy years while still remaining largely functional, despite the occasional leaky joint or frozen pipe. Newer PEX and PVC pipes are somewhat less long-lived, lasting for twenty to thirty years.

However, many people prefer these high-grade plastics to metal due to pricing, lack of reactivity with water, and other considerations. If your home was built after the 1970s, water pipe replacements may not be a matter of much concern.

However, in older midcentury and earlier 20th century homes, it’s important to find out how old your plumbing is. This is especially true in areas with hard water, which has a higher concentration of minerals that can cause faster damage to metal pipes.

The major thing to watch out for are leftover lead pipes. Before people knew that lead is highly toxic when ingested in trace quantities over a long period of time– which can happen when lead pipes are in constant contact with potable water– lead’s durability made it a popular choice for plumbing.

Fortunately, most lead plumbing pipes from the 19th and early 20th centuries have long since been removed. However, with very old historic homes, it’s still something you want to be sure about. Lead pipes absolutely need water pipe replacement with safe modern materials.

Polybutylene pipes, popular during the 1970s and 1980s, should also be replaced whenever feasible, because they’re actually rather fragile and prone to pipe leaks.

If you live in an older home or have recently purchased a historic house in New Jersey, you may want to have a plumber inspect the house to determine whether you may need to consider getting water pipe replacements for plumbing.

Plumbing contractors will generally begin by looking at the most readily accessible pipes, like main water supply pipe line often located in basements and utility rooms. Worn out pipes often show signs of discoloration, flaking, staining, and other abnormalities.

To find out more about water pipe replacements for plumbing in older New Jersey homes, call our experienced renovation plumbing contractors at Degrace Plumbing, at 201-786-2538.